Blue fell in love with music in her childhood. When she was a teenager she played drums, later she learned to play the acoustic guitar and began to compose her own songs. In 2003 she became a Certified Music Practitioner and play therapeutic music for hospital patients, nursing home residents and people with disabilities. Although her main instrument is the guitar, she still plays drums and learns how to play the American mountain dulcimer (appalachian cymbals) and the traditional Native American flute, on which she wants to make her own improvisation during this year's "Beats of Cochlea" Festival.

Blue began to lose her hearing at the age of 25. The disease was gradually progressing, which is why in 2009 she received the hearing implant on her left ear. Supported by her teacher she worked very hard to improve auditory perception. She went through intense hearing trainings, learned to recognize the pitch and distinguish musical intervals. She currently participates in cochlear implant research and was a panelist in the Music and Cochlear Implants Symposium in Montreal in 2018. 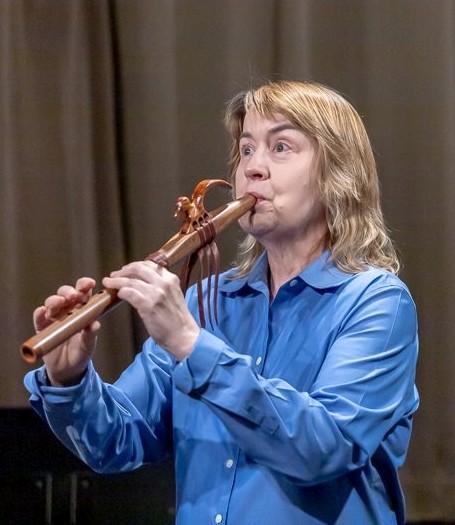